Once again this year, my fam is going turkey-less. Why? All of a sudden, there’s too many pescatarians in the family making it impractical to roast a giant turkey. OK, there’s only two, but more than one is too many in my opinion. So where are we going? Most likely Korean since that’s a general crowd-pleaser. Meat, fish, noodles, and soup, Korea BBQ restaurants have it all. We haven’t decided exactly where to go yet, but here are the options…

For galbi (갈비, grilled beef ribs; pictured above) in fancier digs, Dong Bang Grill is the place to go. The meat is fresh, high quality, and… 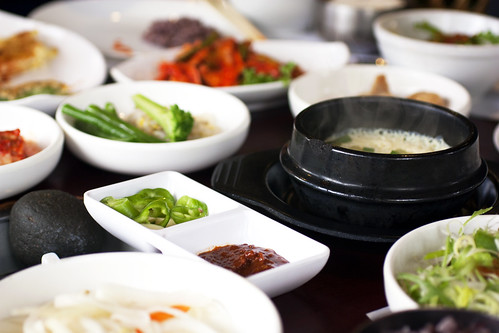 the banchan (반찬, side dishes) is plentiful. However, Dong Bang Grill gets packed quickly with large groups, and reservations are recommended, so it’s not a convenient pop-in kind of place. 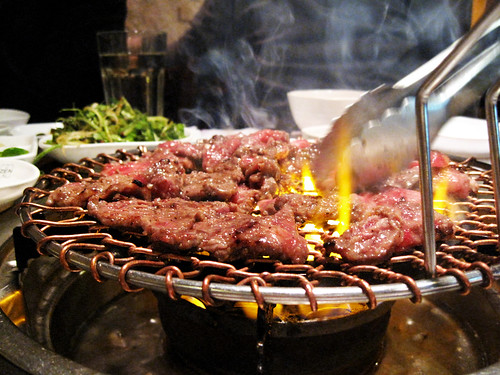 I personally prefer Zen Zen. It doesn’t have as much ambience, but the meat is more flavorful, and the free mini mul naengmyun (물 냉면, noodles in cold beef broth) that comes with any meat order doesn’t hurt. 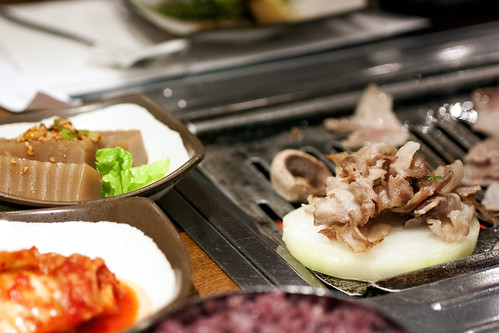 Chung Dam Dong isn’t my go-to for grilled meats, but the baby octopus and pork belly stir-fry is ridic, and their banchan is the best in Jersey. That said, their grilled options like the samgyupsal (삼겹살, pork belly; pictured above) are also mighty tasty. Just don’t order the thin samgyupsal; it sticks too much to the grill. 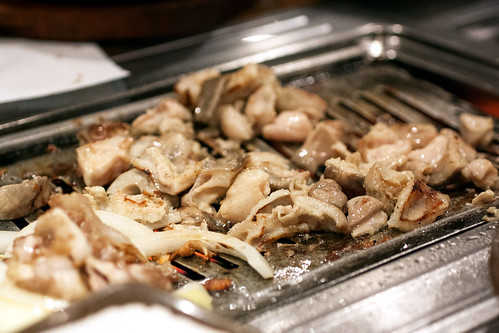 For offal lovers, Chung Dam Dong has that too. Most recently, I ordered the large intestine which was markedly less funky than at other places. This is a minus or plus depending who you are. I personally prefer a bit more funk, just enough to remind you what you’re eating, but it was good nevertheless.

Happy Thanksgiving all! This year was insanely stressful for me (OMG, THE DRAMA!) but I’m thankful things worked out at the end. Happy eating and food bless.