The first time I had Cajun-style seafood in a bag, it was at The Boiling Crab in LA two years ago. As I recall, it was a gloriously hot and messy affair, but alas, there wasn’t one in New York. Now, there’s two in Manhattan, and even one in Jersey called JD’s Boiling Pot.

There’s a few other things on the menu at JD’s, like Kumamoto oysters ($20/dozen; pictured above). No fancy dipping sauces at JD’s, just cocktail sauce and horseradish, but Kumamotos don’t need much anyway. 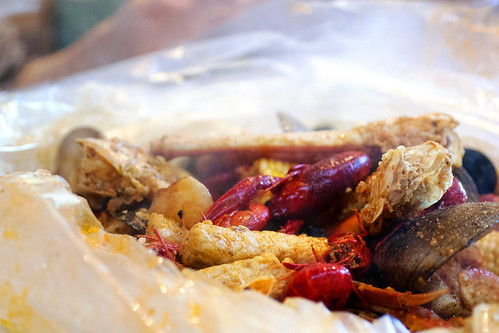 As for the main attraction, the focus at JD’s isn’t on crawfish. It’s a giant hodgepodge of seafood — crawfish, clams, mussels, shrimp, hot dogs, sausages, potatoes, corn, and since the restaurant is owned by Korean people, rice cakes and odeng (fish cakes) — all swimming in a scarlet, fiery pool of butter and Cajun spices ($90 for a bag serving 6 people). For those who don’t want to get your hands dirty, plastic gloves are provided, but I assure you, they will rip. It’s a lost cause, just give in.

Compared to Boiling Crab, the sauce is less spicy (you can’t choose the level of spiciness at JD’s), milder on the Cajun seasonings, and much greasier. As for the seafood mix, I’d prefer much more crawfish and less of everything else. Variety is great, but when it comes to things like this, c’mon, it’s all about the crawfish heads! Still, it’s satisfying and if you factor in the airfare saved, $90 isn’t bad at all.

Raise a greasy, red hand if you agree.